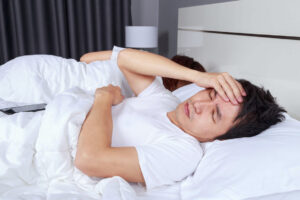 People spend about a third of their life asleep, which roughly equals 25 to 30 years of an average lifespan. Scientific studies have shown how vital it is to understand sleep and its disorders. About twenty years ago, the rapid development of this field led to a new medical specialization called sleep medicine. Doctors began to understand the importance of sleep in human life, how to conduct necessary sleep tests and research, as well as sleep’s effects, both positive and negative, on existing problems and diseases.

The Sleep Center at Hôtel-Dieu de France was established more than ten years ago and has since registered around 4,000 cases. Today, it includes three rooms endowed with the latest equipment to study, treat and monitor sleep disorders.

The center consists of four doctors specialized in sleep medicine in addition to their main specialties (the lungs and the nervous system), and of four technicians working nights to accompany patients and days to help the medical staff read results, as well as nurses and administrators.

“The Sleep Center at Hôtel-Dieu de France examines two types of problems: first, sleep-related problems, and second, health problems that increase sleep disturbances such as nervous system diseases, heart diseases, or respiratory diseases,” explained Professor Moussa Riachy, specialist in lung diseases and cardiopulmonary resuscitation and Director of the Sleep Center at Hôtel-Dieu de France. “The symptoms of sleep disturbances are numerous, but those sought out by doctors and suspected to be symptoms of sleep apnea are excessive daytime drowsiness and fatigue, difficulty concentrating and memory loss, high blood pressure problems without any prior cause, obesity in the neck, snoring and stopped breathing at night.”

Today, sleep apnea is the most common sleep disease as it affects 4% of men and 2% of women. It occurs during sleep through stopped or slowed breathing. With the medical and scientific progress made in recent years, it was found that sleep apnea causes many health problems such as heart attacks, strokes, diabetes and high blood pressure.

The Sleep Center will diagnose the disease and determine its cause, pattern, severity and effects on the body upon waking up.

Other diseases are studied and treated at the Sleep Center such as: respiratory failure due to airway or lung obstruction (especially among smokers who suffer from a decrease in oxygen levels), rib cage contractions that limit the lungs’ functions, high pCO2 levels in the body, heart diseases, in addition to problems of sleep itself, such as excessive sleep, insomnia, sleepwalking or other disorders.

“The Sleep Center conducts numerous studies; however they are mainly divided into four levels. The first is a comprehensive sleeping exam that includes a spirometry test, an electrocardiogram (ECG), an electroencephalogram (EEG) through up to 32 channels to determine the patient’s stage of sleep, monitoring of the sleep position, snoring and oxygen levels, in addition to being accompanied by a technician throughout the night. The second level of testing is often held outside the Center at the patient’s residency, which is why results between this test and the first one may differ from 15 to 20%. The third level includes tests to record sleep without an EEG. As for the fourth, it is a mere test to observe oxygen level fluctuations during the night”, explained Prof. Riachy.

The Sleep Center at Hôtel-Dieu de France is endowed with the latest equipment enabling it to carry out numerous studies, including: a five-stage daytime exam to study the patient’s sleepiness degrees after spending a night at the Center, the BiPAP and Ventilation exams which test the Bilevel Positive Airway Pressure as well as the ventilation pressure, or the Splitnight exam involving two stages, the first to get a diagnosis and the second to come up with a treatment, both conducted under the medical staff’s supervision who will determine the correct treatment doses.

Sleep disorders are still new in the medical field, although they are very common and considered one of the main causes of many diseases including high blood pressure and heart diseases; however, the Lebanese society lacks awareness when it comes to sleep disorders. As studies increase, sleep disorders become more and more important as we understand their impact on our lives and health. After years of experience and treating many cases, the specialized team at Hôtel-Dieu de France is capable of identifying those who need to refer to the Sleep Center.

“Fatigue during the day or after a meal is not normal,” advised Prof. Riachy stressing that, “Fatigue during the day, lack of concentration, memory loss, failing to wake up energized and well rested or failing to wake up at all are all indications that your body is not sleeping or resting enough, even if you slept for more than six hours. If your partner is suffering from agitated sleep, snoring or stopped breathing, they should also consider visiting the Sleep Center.”