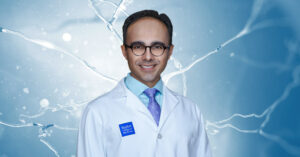 What Is Deep Brain Stimulation and How Does It Work?

“DBS is a therapy that we have for various neurological conditions,” said Dr. Sheth. “It’s a system that you can think of like a pacemaker. But rather than being a pacemaker for the heart, it’s for the brain.”

Dr. Sheth describes the brain as having many circuits that govern everything we do, including how we move.

How Effective Is DBS Therapy?

Though DBS is considered an alternative, it’s a well-established, FDA-approved technique that has been used to treat Parkinson’s and essential tremor for 30+ years.

“There’s been a lot of studies over the years,” said Dr. Sheth. “Randomized trials have been presented in the top medical journals that show that for the appropriately chosen patient, DBS is more effective than the best medical therapy. So, in that appropriately chosen patient, DBS can be very successful at improving tremor for essential tremor and tremor stiffness, rigidity, and those other motor symptoms of Parkinson’s disease.”

One patient who has found success with DBS is Rudy Hardy.

“It’s made a profound difference in my life,” said Hardy. A professional sports photographer and professor of criminal justice, Hardy’s life was controlled by Parkinson’s. He tried medication initially, and though it seemed to work for a while, his tremors eventually worsened. Since undergoing DBS, Hardy’s symptoms are now almost completely undetectable. Watch Hardy talk about his experience with DBS below.

How Does DBS Compare to Other Methods of Treatment for Parkinson’s Disease?

As in Hardy’s case, every patient’s treatment begins with medication until it is determined that they can benefit from DBS.

“Medications are always tried first. Unfortunately, we can only get so far with medications. Oftentimes, many patients try them, and they may work for a little while,” said Dr. Sheth.

How Common Is DBS?

Dr. Sheth describes DBS as a very standard treatment. “These are procedures that we do week in and week out,” he said. “It’s not investigational or experimental.” Around the world, more than 150,000 patients have had DBS for Parkinson’s or tremor with a success rate of 95%.

“Patients need to know that there are these alternatives. They need to know that they’re not necessarily stuck with these symptoms, that there may be a different way to get better control. That discussion is, of course, individual-specific, but the availability of these types of surgical treatments is important for patients to know about.” As Houston’s leader in neurology and neurosurgery, the Neuroscience Institute at Baylor St. Luke’s Medical Center is continually working to find better treatments for neurological conditions to help patients get back their lives. Visit a neurologist to see if you are a candidate for deep brain stimulation.